Dedolight is a focus and dimmable lighting system for film, video and photography, which has existed since 1984th

The first generation of lamps is operated at a voltage of 12 volts, typically with 50- and 100-watt halogen bulbs. Named the system is named after its developer, the German cameraman Dedo Weigert in Munich, in 1991 a technical Oscar (Technical Achievement) received it. The current version of these lamps is usually operated at a voltage of 24 volts and outputs of 100 or 150 watts. The advantage of the system lies in its compactness, the illuminations allows for conventional headlights are too large. The small form, it is possible to attach a Dedolight almost everywhere, for example, to suction feet, with small screw or flexible necks. In addition, the system can be mounted on the camera, which allows for use in documentary or live broadcasts. The luminaires can also be equipped among other things with filters, diffusers and projection intentions to tune for each area of ​​application. The special design of the reflector and the lens a Dedolight achieved a luminous efficacy that is significantly higher than that of conventional lamps with higher performance.

For several years, also lighting heads are available for use in connection with so-called soft boxes, with which a particularly soft light can be formed. Since the light source is located directly at the focal point of the softbox with this system, it has a much more uniform and brighter illumination than comparable soft boxes, which are mounted in front of conventional headlamps. 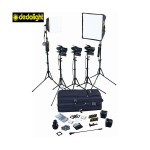 Early 2000s was the 400 series another lighting system introduced, which is much greater than the original system. For this system, Dedo Weigert received another technical Oscar (Scientific and Engineering Award) and an Emmy of 2003. There are now in the Dedolight system also daylight lamps with HMI bulbs.

Dedolights of film, television and video production are used in all sectors, increasingly also by photographers.