Kino Flo is a manufacturer of lighting equipment for use in motion pictures, television and photography. Located in Burbank, California, Kino Flo is best known for its fluorescent tube arrangements that are used for the color of film and digital video. These lights provide a relatively compact and efficient way of providing soft lighting. Compared to the original workhorse of motion picture lighting, incandescent lights (and, more recently, HMI lights), Kino Flo tubes produce less heat and fit into smaller spaces, two significant advantages that have made them popular with professionals.

Soft light use is popular in cinematography and film. Various Hollywood production companies along with independent film makers are known for their use of soft lights.

History
The first Kino Flo unit was created in 1987, during the filming of the movie Barfly. Director of photography Robby Müller was filming in a cramped interior, and couldn’t fit traditional lights into the location. In order to work around the problem, the film’s gaffer Frieder Hochheim and best boy Gary Swink designed a high-output fluorescent light that had a remote ballast, allowing the lamp unit to become small and lightweight enough to be taped to the wall. Hochheim and Swink subsequently created a company, Kino Flo Incorporated, to manufacture and market their innovation to the film industry. The new lights were quickly embraced by cinematographers, and now are considered a staple of a standard motion picture lighting package. 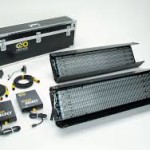 The two major innovations of the unit were the high-frequency ballast, which gave the lights greater intensity and eliminated flicker commonly found in off-the-shelf fluorescent tubes, and the Kino Flo tubes, which contained a number of special phosphors designed to eliminate the characteristic tints in the magenta-green spectrum which are present in most domestic fluorescent lights. Since the type of tube determines the color temperature, any Kino Flo lamphead can be quickly converted between daylight and tungsten balances by simply changing out the tubes. Mid-range color temperature can also be created by mixing tubes of both color temperatures. Kino Flo have also expanded their tube line in recent years, creating visual effects tubes optimized for bluescreen and greenscreen spectra, as well as a variety of other shades for general color effects.