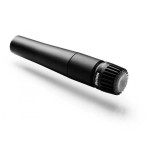 Classic Shure “Circle S” logo from the 1930s, which graphically depicts an electronic circuit[1]
Shure was founded by Sidney N. Shure in 1925 as “The Shure Radio Company”, selling radio parts kits several years after completely manufactured radios became commercially available. The company’s office was located at 19 South Wells Street in downtown Chicago, Illinois. The following year, Shure published its first direct mail catalog, which was one of only six radio parts catalogs in the United States at the time. By 1928, the company had grown to over 75 employees, and Sidney’s brother, Samuel J. Shure, joined the company, which was renamed Shure Brothers Company. The company moved into new offices at 335 West Madison Street in Chicago. In 1929, with the advent of the Great Depression and the increased availability of factory-built radios, Shure Brothers Company was forced to greatly reduce their staff and became the exclusive US distributor of a small microphone manufacturer.[specify] In 1930, Samuel J. Shure left the company.