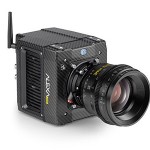 The camera is equipped with an onboard SxS card encoder that can record in either Rec. 709 or Log-C to ProRes 422 or ProRes 444 codecs.as well as DNxHD in 1080p resolution. For an additional 1,350 Euros, Alexa camera owners can purchase a software “key” that will unlock the camera’s ability to record up to 120fps in ProRes 422 HQ.The camera is designed for use in high budget feature films, television shows, and commercials, and is widely seen as Arri’s answer to the growing acceptance of the Red One camera, along with lower resolution cameras like the Sony CineAlta(35 mm, 1080p), Panavision Genesis (35 mm, 1080p), Thomson Viper FilmStream (2/3″, 1080p) to shoot feature films.

The Alexa’s ALEV III sensor has 3392×2200 effective pixels used for generating an image, 2880×2160 pixels are generally used for recording on the Alexa Studio and M in 4:3 mode, and 2880×1620 pixels are used for recording on the regular Alexa and other models in 16:9 mode, the rest of sensor is used for lookaround in the viewfinder. Alternately the full sensor resolution may be employed in ‘Open Gate’ mode for resolution demanding situations.

ArriRaw is a raw codec similar to CinemaDNG that contains unaltered Bayer sensor information, the data stream from the camera can be recorded via T-link with certified recorders like those from Codex Digital or Cineflow.