Filter by price
Filter By Brands

Carl Zeiss (11 September 1816 – 3 December 1888) was a German maker of optical instruments best known for the company he founded, Carl Zeiss Jena (now: Carl Zeiss AG).[1] Zeiss made contributions to lens manufacturing that have aided the modern production of lenses. Raised in Weimar, Germany, he opened a lens-making workshop in the 1840s in the city of Jena. At first his lenses were only used in the production of microscopes, but when cameras were invented, his company began manufacturing high-quality lenses for cameras.

In 1847 Carl Zeiss started making microscopes full-time. His first innovation was simpler single-lens microscopes intended for dissecting work. He sold 23 of them during the first year of production. Zeiss decided he needed a new challenge, so he began making compound microscopes. He created the Stand I which went to market in 1857.

In 1861 he was awarded a gold medal at the Thuringian Industrial Exhibition for his designs. They were considered to be among the best scientific instruments in Germany. By this point, he had about twenty people working for him and an expanding business. In 1866 the Zeiss workshop sold their thousandth microscope.

In 1872, he joined up with physicist Ernst Abbe. Their combined efforts lead to the discovery of the Abbe sine condition. Theoretically, the Abbe sine condition could greatly improve how well lenses could be made. However, a form of glass strong enough to fully test the theory did not exist at the time. Abbe then met Otto Schott, a thirty-year-old glass chemist who had just received his doctorate. They collaborated and in 1886, produced a new type of glass that could fully use the Abbe sine condition. This new type of glass made possible a new class of microscope objective, the apochromatic (often abbreviated ‘apo’). Zeiss used water immersion to form a compensating eyepiece which produced images with little or no color distortion.

Zeiss’s son had entered the business with him, but retired soon after Zeiss’s death of natural causes on 3 December 1888. The business was incorporated as the Carl-Zeiss-Stiftung in 1889. It gained an international reputation for the manufacture of optical instruments of all kinds, and remains in business to this day, where the company might be most known for its broad selection of optical scopes and binoculars. 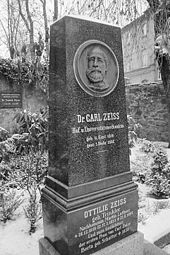 For customers
Accounts
Sign Up for Weekly Newsletter
WhatsApp