Focusrite plc (formerly Focusrite Audio Engineering Ltd.) is an English audio equipment manufacturer based inHigh Wycombe, England. Focusrite designs and markets audio interfaces, microphone preamps, consoles, analogueEQs and Channel strips, and digital audio processing hardware and software.[1] Many, but not all, Focusrite products are manufactured for the company in China.

The resulting module, named the Input Signal Amplifier (ISA) 110, consisted of a transformer-coupled microphone preamplifier, 4-band equaliser and high- and low-pass filters. The initial modules were delivered to Air Montserrat in 1987 and were very well received – as a result, Air London ordered several the following year. The ISA 110 was subsequently sold as an outboard system. The ISA130 was added to the range in 1988, a single-channel Comp/Limiter, De-Esser and Expander/Gate developed by Rupert Neve and Trevor Stride.

Focusrite decided to use these designs as the basis of a complete recording console, and the Focusrite Forte console was developed as a result in 1988. The concept was simply to produce the highest-quality recording console available at the time, regardless of cost. The prohibitively expensive design limited the production to just two units, however, after which Focusrite fell into financial difficulties. One console was delivered to Master Rock studios in London and the other to Electric Lady in New York, remaining in use for many years. The original Focusrite logo with its musically inspired italic “ff” is actually that of the console, standing for “Focusrite Forte” (as well as the musical term “fortissimo”, or “very loud”). 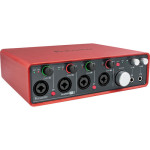 Focusrite saw a growing interest in the microphone preamplifier, EQ and dynamics capability of the console, and decided to spin those out into a new range of outboard modules so that the technology could be made available independently of the console itself. This became the Red Range, with distinctive red milled aluminium front panels, launched in 1993. Over subsequent years Focusrite introduced several ranges of outboard audio processors. The Blue range, aimed at mastering engineers, followed, then in 1996 the Green range, a series of lower-priced processors was launched, aimed at musicians and home and artist-owned recording facilities.

The Platinum range followed in 1998, with characteristic silver-fronted rack cases that combined more effective production design, lowering prices, with more advanced circuitry providing additional features, including not only mic pres and processing, but also a range of effects. The company also co-developed plugins and hardware for the popular Pro Toolsrange of digital audio workstation (DAW) systems.

At the same time, new derivatives of the original ISA range were developed, providing new features such as variable mic input impedances. The ISA range is still in production, now with the additional of digital conversion as well as analogue signal processing. The ISA design originally included both input and output transformers, the latter to allow driving long studio lines, but with the advent of on-board analogue to digital (A/D) conversion, this was dropped from the design.

Late 2003 saw the introduction of the Liquid Channel. This unit combines analogue and digital technologies to emulate virtually any combination of classic mic preamp and compressor. At the same time, Focusrite launched another plug-in for Pro Tools, the Forte. This emulated the sound of the two key modules from Focusrite’s beginnings, the ISA 110 EQ and ISA130 compressor from the original Forte console.

A significant step for the company was the addition of the Saffire Firewire range of audio interfaces, the first being announced at NAMM in early 2005. This range has continued to expand, offering mic/line/instrument preamps and conversion in a number of configurations, and has more recently been joined by the Scarlett range of USB interfaces. Saffire is also available with real-time DSP-powered tracking and mixing capability designed for the home studio environment, providing compression and EQ for tracking, plus monitor reverb; it also includes VRM: Virtual Reference Monitoring technology. VRM allows a mix to be auditioned in a several different emulated environments – such as living room, bedroom studio and professional studio control room – with a selection of monitoring and other loudspeakers, by listening on headphones. The VRM Box is also available, a USB headphone amplifier with DSP software for monitor emulation.

Late 2010 saw Focusrite return to the plug-in arena with the release of the Midnight plug-in suite. This utilises powerful DSP technology to exactly model the classic Focusrite ISA110 equaliser and ISA130 compressor, even including high-resolution front-panel emulations reminiscent of the hardware units. The ISA110 and 130 modules were created for the Forté console in the 1980s.

On 12th December 2014, Focusrite was floated on the AIM market as Focusrite plc.