In September 2014 GoPro announced the HERO4, available in Black Edition and Silver Edition, which replace their respective HERO3+ generation predecessors. The Hero, a budget camera, was also announced.

The HERO4 Silver Edition is basically a HERO3 Black Edition with the addition of a micro speaker, built in touch screen display, Protune for photo & highlight tag the first GoPro with this, a lower clocked Cortex-A9 and missing the Black Editions integrated analog-to-digital converter which supports a wider variety of professional low-sensitivity external mics.The video modes supported by the HERO4 Silver Edition are similar to those of the  HERO3+ Black, due to the higher processing speed and thermal requirements of 4K video (3840×2160), but it supports Wi-Fi, Bluetooth and contains the same Ambarella Inc. A9 SoC as in the HERO4 Black. Hero 4 Silver known as the simplest GoPro of all time. 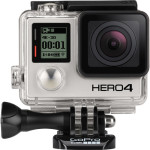 The  HERO4 models maintains the H.264 video codec of previous versions and MP4 file formats.  claims the mono microphone in both the Black and Silver Editions have twice the dynamic range of the HERO3+, and that the

Added to wishlistRemoved from wishlist 18