Samson Technologies began in 1980 designing wireless microphone systems. Today, we are an industry leader in both consumer and professional audio with three notable brands:Sam son Audio, Sam son Wireless and Hartke. Over 250 of our products are sold and distributed in over 140 countries around the world.

In 1980, Sam son introduced our first wireless microphone system. Over the years, Sam sonhas become a leader in the wireless field. In the early ’90s, we began to expand the reach of our audio products through the development of power amplifiers, mixers, wired microphones and signal processors. In 2005, we introduced the first professional USB microphones to be used by musicians, broadcasters and podcast enthusiasts. Our USB microphones are now the industry standard. 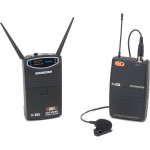 Hartke revolutionized the world of bass amplification in 1985 with the creation of a unique aluminum cone driver that produced a bass tone with far broader dynamics than had ever been heard before. We have gone on to create a full line of bass amplifiers, cabinets and combos that are used by some of the world’s greatest musicians.

Over three decades, Sam son has grown from a small two-person operation to a worldwide enterprise, dedicated to innovating new products that will enhance the lives of music and broadcast professionals everywhere.

The LM5 lavalier features an omnidirectional polar pattern and frequency response well suited for capturing vocals in speech applications. The CT7 is powered up to 14 hours on a single 9V battery. The portable, camera-mountable UM1 receiver also operates on a 9V battery and features a mini-XLR output connector, diversity reception, headphone output with level control, specially tuned antennas, and a DC input for power with an external power supply (not included).