Kingjoy Tripod  is used to stabilize and elevate a camera, a flash unit, or other photographic equipment. All photographic tripods have three legs and a mounting head to couple with a camera. The mounting head usually includes athumbscrew that mates to a female threaded receptacle on the camera, as well as a mechanism to be able to rotate and tilt the camera when it is mounted on the tripod. Tripod legs are usually made to telescope, in order to save space when not in use. Tripods are usually made from aluminum, carbon fiber, steel, wood or plastic.

Kingjoy Tripod are used for both still and motion photography to prevent camera movement. They are necessary when slow-speed exposures are being made, or when lenses of extreme focal length are used, as any camera movement while the shutter is open will produce a blurred image. In the same vein, they reduce camera shake, and thus are instrumental in achieving maximum sharpness. A tripod is also helpful in achieving precise framing of the image, or when more than one image is being made of the same scene, for example when bracketing the exposure. Use of a tripod may also allow for a more thoughtful approach to photography. For all of these reasons a tripod of some sort is often necessary for professional photography as well as certain video uses. Tripods are also used as an alternative to C-Stands to photographic accessories.

For maximum strength and stability, most photographic kingjoy tripods are braced around a center post, with collapsible telescoping legs and a telescoping section at the top that can be raised or lowered. At the top of the tripod is the head, which includes the camera mount (usually a detachable plate with a thumbscrew to hold on to the camera), several joints to allow the camera to pan, rotate and tilt, and usually a handle to allow the operator to do so without jostling the camera. Some tripods also feature integrated remote controls to control a camcorder or camera, though these are usually proprietary to the company that built the camera. Materials used in the construction of tripod or monopod legs include metal (typically bare or painted aluminum), wood and carbon fiber-reinforced plastics, among others. 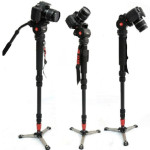