Filter by price
Filter By Brands

At the 2012 NAB Show, the company announced the Blackmagic Cinema Camera, featuring interchangeable EF mount lenses. The 2.5K sensor allows enough oversampling for clean 1080p or 2K output and is announced to have a dynamic range of 13 stops. 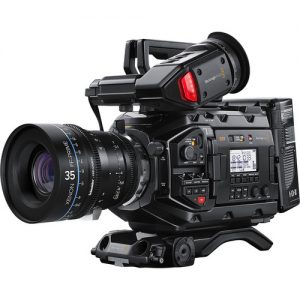 Alongside the Production Camera 4K, the company also announced the Blackmagic Pocket Cinema Camera, a highly compact camera which records to SD cards in digital Super-16 1080p RAW or ProRes, has 13 stops of dynamic range, and is compatible with active MFT mount lenses, priced at under $1,000.[16] The camera has 12.48mmx7.02mm Super 16mm image sensor size, which is only about 36 percent of MFT sensor size, or about 70 percent of the 1″ sensor size. The camera can take video at 23.976p, 24p, 25p, 29.97p, and 30p. It has a built-in stereo mic and 3.5mm audio jack. It cannot take photos, but has a time-lapse function.[17] The camera uses a 12.5mmx7mm sensor with a crop factor of 2.88x—smaller than Micro Four Thirds System sensor, which makes it difficult to shoot wide angle images, even with wide-angle lenses.[18]

For customers
Accounts
Sign Up for Weekly Newsletter
WhatsApp