Typically, a lens is used to focus the light reflected or emitted from objects into a real image on the light-sensitive surface inside a camera during a timed exposure. With an electronic image sensor, this produces an electrical charge at each pixel, which is electronically processed and stored in a digital image file for subsequent display or processing. The result withphotographic emulsion is an invisible latent image, which is later chemically “developed” into a visible image, either negativeor positive depending on the purpose of the photographic material and the method of processing. A negative image on film is traditionally used to photographically create a positive image on a paper base, known as a print, either by using an enlargeror by contact printing.

Photography is employed in many fields of science, manufacturing (e.g., photolithography) and business, as well as its more direct uses for art, film and video production, recreational purposes, hobby, and mass communication.

Several people may have coined the same new term from these roots independently. Hercules Florence, a French painter and inventor living in Campinas, Brazil, used the French form of the word, photographie, in private notes which a Brazilian photography historian believes were written in 1834. Johann von Maedler, a Berlin astronomer, is credited in a 1932 German history of photography as having used it in an article published on 25 February 1839 in the German newspaperVossische Zeitung. Both of these claims are now widely reported but apparently neither has ever been independently confirmed as beyond reasonable doubt. Credit has traditionally been given to Sir John Herschel both for coining the word and for introducing it to the public. His uses of it in private correspondence prior to 25 February 1839 and at his Royal Society lecture on the subject in London on 14 March 1839 have long been amply documented and accepted as settled facts. 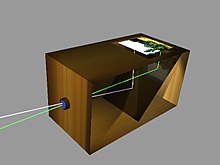 Daniele Barbaro described a diaphragm in 1566. Wilhelm Homberg described how light darkened some chemicals (photochemical effect) in 1694.The fiction book Giphantie, published in 1760, by French author Tiphaigne de la Roche, described what can be interpreted as photography.

The discovery of the camera obscura that provides an image of a scene dates back to ancient China. Leonardo da Vincimentions natural camerae obscurae that are formed by dark caves on the edge of a sunlit valley. A hole in the cave wall will act as a pinhole camera and project a laterally reversed, upside down image on a piece of paper. So the birth of photography was primarily concerned with inventing means to fix and retain the image produced by the camera obscura.

Renaissance painters used the camera obscura which, in fact, gives the optical rendering in color that dominates Western Art. The camera obscura literally means “dark chamber” in Latin. It is a box with a hole in it which allows light to go through and create an image onto the piece of paper.

How to Make Time Lapse Videos

Nikon Z7: A new Champion is here Nikon has announced its first Mirrorless full frame camera set to release in September 2018. The flagship camera is bound to ...